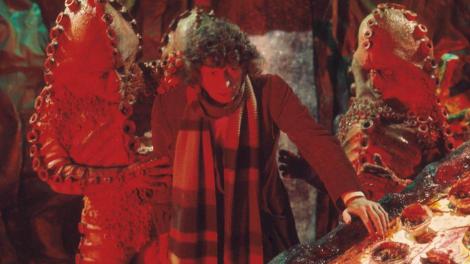 Returning to Earth, The Doctor, Sarah and Harry arrive in the Scottish Highlands to investigate the mysterious destruction of several oil rigs in the North Sea. Local superstition speaks of a deadly threat that lurks in the mists on Tulloch Moor but the truth is even more disturbing; the legendary Loch Ness Monster is a terrifying cyborg beast which is controlled by the Zygons, an advanced alien race who are desperate for their own survival at any cost.

Terror of the Zygons was intended to be the last story of Tom Baker’s first season as The Doctor and is the last story to feature the TARDIS crew of The 4th Doctor, Sarah Jane Smith and Harry Sullivan. It also was the start of Tom Baker really beginning to feel at home in the role of The Doctor. It feels very different compared to the rest of Tom’s original run which aside from Robot was set either in the distant future or on another world. This demonstrated that the show had finally relinquished itself of the Earth based setting that dominated most of Jon Pertwee’s era as The Doctor. Terror indeed almost feels like a throwback to Jon Pertwee’s reign as the Time Lord which such staples of the Pertwee era, those being present such as UNIT, a mysterious alien incursion on Earth and, of course, The Doctor being relatively grumpy about being forced to be involved in the affairs of humans.

While the story could simply be seen as a rehash of older stories it should instead been viewed as a last hurrah for an old set of stories that were being killed off to make way for something different.

Tom Baker’s Doctor is not yet the mad goggle eyed alien that we see in later stories. Though he had already made his mark as The Doctor, he still wasn’t quite his own man. We’d seen glimmers of the new Doctor in Ark in Space and Genesis of the Daleks but his character wasn’t yet fully formed. Terror is ironically more of a step back in Tom’s evolution of The Doctor, however. He is, in fact, more like Pertwee’s Doctor. He reacts to his companions in a Pertweeish manner and his reaction to the Zygons is similarly Pertweeesque.

There are, however, glimpses of Tom’s Doctor behind the Pertwee mask. His reaction to The Brigadier throughout the story feels more Tomish. A particular example is when he takes Sarah from an induced trance. His eyes show a glimmer of madness while he is explaining to Benton that he mustn’t touch her or she’ll die. Strangely enough his Pertweeness is somewhat fitting seeing as this would be the last time UNIT would appear in the series as recurring characters until the modern revival. It is also interesting to see how Baker plays The Doctor when he is forced to be the straight leading man rather than the boggle eyed alien.  He’s much more cutting and quite dark at times, giving a greater sense of gravity to his performance. It anchors his performance so that when he smiles and has a laugh it makes the audience feel that they can break the intensity of the story for a bit without feeling as though the whole thing is a laugh fest.

The Zygon costumes are wonderfully realised. For their time the costumes are rather sophisticated. Indeed when the Zygons returned to the series in 2013 their design had barely changed with the exception that their faces now looked like they had just been released from some sexual offenders unit. Seriously, The Day of The Doctor Zygons are pretty creepy and not creepy in a Saturday night teatime viewing way either. However, back to the real Zygons; they manage to move in a way that may seem laboured and a bit silly but could also been seen as menacing. No matter how much that Zygon huffs and puffs he’ll still catch you. The organic feel of the Zygons also makes them stand out from other Doctor Who monsters, they look and feel as though they have just come up from the Earthy ground of their home planet and are ready to destroy us all.

Terror of The Zygons is a throwback to an age that was ending when it was made. It also marks the slow transformation in the writing from Jon Pertwee to Tom Baker. As time went on the writers got more used to Baker’s style as The Doctor and made the scripts suit him more. Baker’s Doctor was a menacing character but also someone who truggled to cope with who he was. As Capaldi’s Doctor dawns it seems fitting to look at how Tom Baker’s dark Doctor was and how it might affect the current incarnation of the Time Lord.