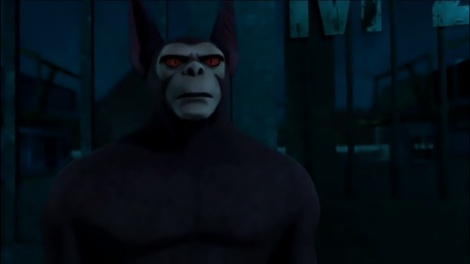 Batman and Katana encounter a strange Man-Bat creature, an experimental result of Pyg and Toad’s animal army of mutant humans. Meanwhile, in order to keep his enemies closer, Bruce Wayne befriends Harvey Dent and the captain of the SCU, Dane Lisslow, with whom he makes a strong connection.

While this episode follows on from the previous few it also begins a new storyline at the same time. With Alfred back in place the status quo returns as do two of The Dark Knight’s old foe’s Pyg and Toad.

Pyg and Toad’s plot to create an evil army to take over Gotham seems reasonable enough and a good idea of a threat for a twenty minute TV show. However, it doesn’t quite turn out that way. When it is stated that they are creating an army the viewer begins to imagine hundreds of mutant humans. In the end though all we see are four people and three of them aren’t even changed by Pyg and Toad’s process. It seems as though the idea was undeserved and makes the episode not really have a defined climax .

Something that is done better though is the introduction of Man Bat aka Doctor Kirk Langstrom. Langstrom is usually shown as a scientist who experiments on himself in a Jekyll and Hyde type scenario. Here he is shown to have been forced to change by Pyg and Toad. Though the gothic element is lost from his story he also gains a much more sympathetic quality, as opposed to a scientist who tested it on himself so he could get money, he is shown to be a victim.

All in all, though this episode was not the best of the crop it was still an enjoyable watch and proved to be an excellent introduction for the character of Man – Bat.