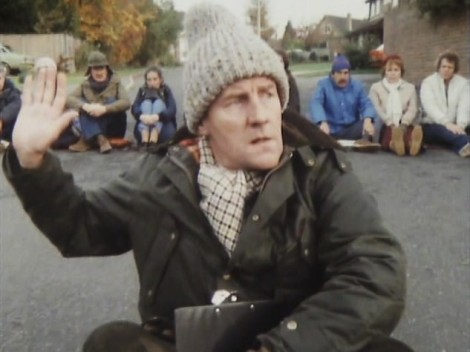 Martin from Ever Decreasing Circles. Is he Machiavellian?

Niccolò Machiavelli wrote a book called The Prince in 1513 in Florence. It was a book about how the modern prince should work, how to get power and then how to keep hold of it. Machiavelli wrote this book in an attempt to help him get back into favour with the Medici family who had returned triumphant to Florence after a long exile in 1513.

The Prince has been used by politicians for centuries from Thomas Cromwell to Thomas Jefferson as well as Napoleon, Mussolini and possibly even Tony Blair who visited Machiavelli’s home not long after winning the 1997 General Election. Even Dallas’s famous oil baron J R Ewing had a copy of The Prince. How on Earth does this have anything to do with comedy you might ask? Well in The Prince, Machiavelli set down a set of rules known as “The Machiavelli Ideals” which a Prince must follow if he wants to attain power. These ideals included being cunning, deceitful, manipulative and willing to do what you can to maintain power and prestige and influence over others.

Obvious interpretations of these ideals appear in the character of Blackadder as seen in the series that bears his name. The first version of the character, though more weedy than his later incarnations, shows that he is a Machiavellian character. He is constantly plotting to take the crown and manages to manipulate those around him including the slightly smarter Baldrick. He possesses all the traits that Machiavelli would recognise as being mentioned in his book.

However, other less obvious characters are Machiavellian. Take for example Captain Mannering in Dad’s Army. Though he is less successful in his plotting than Blackadder, Mannering is still a Machiavellian character. He is always trying to make himself look more intelligent than he is, to make sure that his Home Guard is the best in the area and that he is a competent and great leader. Mannering is typical of the British comic character in that he follows the Machiavellian ideal to its natural end, being a conniving, cunning, manipulative power seeker.

Even such characters as Martin from 70s sitcom Ever Decreasing Circle and Mr Bean from the show of the same name have the Machiavellian touch about them. Martin is constantly jealous of Paul and always wants to prove he is his equal.  This is where the Machiavellian tendencies creep in. Martin uses his cunning and manipulative nature to try and beat Paul. This is used for great comic effect as it is with other Machiavellian characters that exist in the comic genre.

Mr Bean, as I have mentioned above, may be childlike but he follows the Machiavellian template. He wishes to have the power in every situation he is in and manipulates people and situations to his advantages. Mr Bean also, interestingly has sadistic qualities. For instance in one episode he jokingly pushes a blind man in front of a bus who is saved by another person. In a dramatic character this would be seen as a bad quality, as showing a lack of empathy between the character and those that surround him. However, because Mr Bean is a comic character and is portrayed as essentially harmless we find scenes like this funny, without the dramatic back up, funny rather than scary.

Machiavelli died over 500 years ago but his influence lives on through his magnum opus.  The Prince has helped fascist dictators stay in power but it has also resulted in some of the greatest comic characters of all time. Ranging from Malcolm Tucker of The Thick of It to Captain Mannering and beyond, Machiavelli has fashioned a way for us to laugh at the horrible side of life. He managed to create a series of characteristic which in leaders we detest but in comedians we applaud. He has given us a way to make fun of and laugh at all the dark parts of the human condition and surely that is the greatest gift of all.

A modern day copy of The Prince.