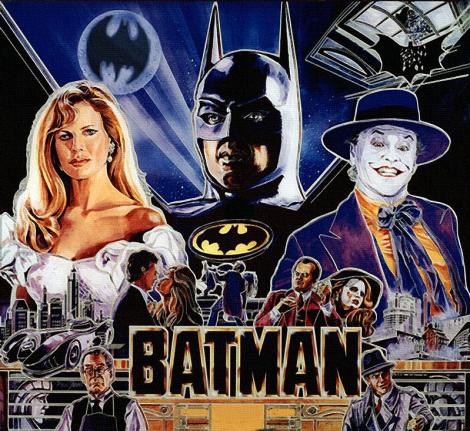 Batman is 75 years old this year. To celebrate I shall be posting a Bat Cave full of reviews and articles dedicated to The Dark Knight. The second of these is a review of Batman’s second film, the 1989 Batman movie. Taking a darker turn on the Batman myths which mirrored the comic books, Tim Burton’s remake of the Dark Knight saw Gotham go almost retro with Batman and his villains becoming 40s style in this action film. This makes them more menacing than their 60s predecessors and creates greater tension.

Stalking the night is a creature to be feared by the criminals of Gotham and honoured by its citizens. His name is Batman.

Tim Burton’s dark, gothic interpretation of Batman has all the hallmarks of a Burton esq film. The freakish creature despised by all (The Joker), the incredibly vivid and grand sets of Gotham and the dark troubled hero of Batman. Though these elements are by no means down to Burton as they had been present in the comics since the beginning, Burton is the first to take this dark saviour and bring him to the screen successfully without having to make him child friendly.

Burton’s Batman feels much more like the Batman that comic fans are use to, a vigilante who wants to take out his dark inner pain about his parent’s death and use it as a weapon with which to stamp out the criminals that killed his parents.

This gritty realism seems to mirror Frank Miller’s Batman: Year One and The Dark Knight Returns. Though Burton’s world is nowhere near as brutal as The Dark Knight Returns it does have a similar feel to it. While Returns Batman is a seasoned veteran of the Superhero game the Batman we see in this film has only just started, rather like the much younger Batman we see in Year One.

Michael Keaton’s Batman is much more affable than say the Batman we see in Year One. In the film, Keaton is more likeable and not as cut off from the world as the Year One Batman. We see this with his relationship with Vicki Vale and Alfred.

This raises the question that if unlike the other Batmans he is more able to create stronger relationships then why does he still have this burning desire to defeat the criminals of Gotham?  Why hasn’t he got on with his life? The answer to this question is brilliantly put by Keaton in the film. He feels he has to. Unlike other Batmans he isn’t as depressed and brooding about his mission but has a more cold determination to do what he thinks is right. This makes the character feel more three dimensional and gives him that added groundedness that both the 60s Batman and sometimes the comic book Batman can lose. Keaton also has more gravitas due to his groundedness than his immediate predecessor.

Similarly, Jack Nicholson’s Joker is darker (keeping in line with the tone of the film) than Caeser Romero’s Joker. While Romero’s Joker was a clown with a slight criminal slant, he was more of a mischief maker than a killer while Nicholson’s character is truly evil. He still has the same sense of clownishness that defines the Joker but he is much more sinister and evil than Romero’s Joker. Nicholson tackles the role with his usual odd ball sense of humour mixed with a great stillness which makes you watch everything he does. He is a flawless complement to Keaton’s Batman and also a perfect opposite. While Batman is a much more methodical and calm character the Joker is always losing his temper and having mad outbursts.

All in all, Batman is a great film and shows the beginnings of cinema’s attempt to take a previously perceived childish character and give him the agency and respect he deserved. The music, acting, lighting, sets and direction all come together to create a fantastic piece of cinema that shows off the best of the Batman myths.