As Sherlock Holmes once said to Dr Watson:

It is a capital mistake to theorize before one has data. Insensibly one begins to twist facts to suit theories, instead of theories to suit facts.

And he’s right. Data, data, data – without data you can make all sorts of mistakes. My theorizing about the two Chinese TV stations having taken the episodes was wrong. Then again, it seemed the most logical assumption at the time. How else did these (now 10) film canisters arrive in Taiwan? I’m still not quite sure. However, there is far too much information to simply update the previous article, it seems fitting to simply write a new one. To quote Holmes again:  You know my method. It is founded upon the observation of trifles. This time I shall  put the facts in front of you and then you can decide the truth.

I’d sort of given up on the whole missing episodes stuff. I’d attempted to get in contact with Keith, the episode finder, via email and Facebook and he didn’t seem to want to talk. I tried several others but they didn’t appear to want to share information. Oh well, I thought, leave it to the experts. That is until someone came a knocking. Several weeks after the article had been published I received an email from my Cult Den editor, Steve. He’d seen a comment on my article to do with the episodes. As readers will probably know by now the comment stated that he had met a US Sergeant in the ’80s who told him that while out in Asia he saw a Dalek story with Patrick Troughton.  I had a look and it seemed genuine enough. It perked my interest. I decided to email Eric Loveman again, who as some readers will remember, cleared up the whole broadcast in Taiwan thing. I sent him an email asking him whether he remembered film canisters being sent to the troops in Taiwan. He responded:

I don’t remember anything specifically like that. The Taiwan TV networks showed some US TV shows.  Also, we had a US military movie theater that showed American feature films, and I think you could also see them in some Taiwan movie theaters. In Vietnam, we got feature films in 16mm “canisters” that were shown in the enlisted and officers clubs, but they weren’t TV series — they were feature-length movies.

The mention of the 16mm canisters interested me and so I sent Eric another email asking about them. He replied:

The 16mm feature films were on a circuit, so they were sent on to other bases after being shown. Where they eventually ended up, I have no idea.
Could the Doctor Who canisters have somehow got mixed in with the films? It would make sense of how they stayed in Taiwan and got confused for an Armed Forces lot but how on Earth did they get there? Some people have suggested that there could have been other forces in Taiwan at the time that could explain  the tapes being there. Eric replied:
As far as I can remember, the only foreign military presence on Taiwan was American. I’m sure if there were any from any other countries their numbers were very small.
So it seemed likely that the episodes were definitely connected with the American forces as opposed to any other military presence. Deciding that I needed to get in contact with our friend at The Den and his story about Sergeant and see what the modern Armed Forces Network had to say, I sent off  a few emails. Then as with last time a lull descended and I forgot about it all for a while. While looking back over the email I sent to Eric a few days after, I finally noticed the mention of Taiwan TV Networks. How could I have missed this? I guess that Eric was referring to the two Chinese stations that he had mentioned before. If they had got hold of a US TV series then surely it would not be impossible for them to have got hold of the Doctor Who tapes. I sent another email off to Eric asking him about the networks. My inbox pinged shortly after. The US Armed Forces Network had got back to me.

The Sergeant who replied to me said he’d ask around the AFN office to see if anyone remembered anything and suggested I posted on their Facebook page. I did and he sent another message suggesting I ask a group of old Armed Forces members about them. However, during this I had a quick scan of the Missing Episodes Forum and suddenly realised that the poster Robert Lia ‘s source seemed to say that Doctor Who was broadcast in Okinawa, the same place as the Sergeant who had seen Troughton with the Daleks had mentioned that he was stationed. There seemed to be some pointing towards Okinawa as some “ye olde Dr Who” hub.
I decided that the best thing to do was to get in contact with the Okinawa TV people and see if they knew anything. Meanwhile, I  wondered how logistically the canisters could have got from Okinawa to Taiwan, I mean who would bother to transport all these old film cans across from Japan to China and not bother to actually broadcast them? It could have been possible if the two Taiwan TV stations could have bought them from the Okinawa station. While waiting to be allowed into ex Armed Forces Members group I got in touch with Paul Vanezis via email and explained to him about my article. He was very pleasant and answered my questions. I asked him about how the tapes had come to be in Taiwan:

The films were ‘sold’ as non-theatric screenings (so at minimal cost) to the US Armed Forces Network and there are strict rules as to their use and demise. It appears that the rules weren’t followed regarding how these were disposed of.
I asked Paul where the film had been censored. He replied:
All censorship was done in the States.
He further stated that in regards to more episodes being found:
The likelihood of any more being out there is remote.

As no photographs exist of the tapes, Keith had sent a brief description to Paul of the episodes. I asked him what he gathered from the description. He replied:
All I know is that the films were not in the original cans and have mould on them. Keith was going to have them looked at professionally locally to where he is. From the description, we can conclude various things.
I asked Paul what we could conclude from the descriptions. If the cans were different from the actual film inside them, then how could you tell what the actual film was without playing it? The mould seemed to me at least to suggest the episodes might not be playable. Paul responded:
To be honest, I’m rather reluctant to go on the record about these films for a variety of reasons, not least because I haven’t examined them myself. However, Keith has and they are his films, so I must conclude based on his description, that’s what’s written on the leaders and other information regarding the condition of the films is that he is not making it up. However, my main motto is ‘I’ll believe it when I see it’. In this case, it’s more believable because he isn’t claiming to have found any missing episodes, and in fact the existence of the films was known about for some time, just not what they were, hence the secrecy.
I found what Paul had to say fascinating and intrigued me even more about the films. If the censorship of these films had taken place in America then surely some tapes might be located somewhere in the US? America is a big place and it is possible some bits of film got saved. If I knew that the trail to find out about these cans would (metaphorically) take me from Asia to America, I’d have packed some sun glasses.

A few days past and nothing seemed to be happening. I tried to see if the Armed Forces Unit had let me into their Facebook group. They hadn’t. All is got was Facebook telling me this:
The page you requested cannot be displayed at the moment. It may be temporarily unavailable, the link you clicked on may have expired, or you may not have permission to view this page.
The link, for anyone else who wishes to try and get into it is here: https://www.facebook.com/groups/4481656524/
Suddenly, a reply came from the man who had started this all off with his comment about Troughton and Daleks in Asia.
I am not in contact with him. I believe his name was “Jeff” or “Jeffrey”. He was a USAF (United States Air Force) reservist when I knew him. We used to hang out at the wargaming club of the Univ. of Illinois at Chicago in the mid 1980s. He used to tell us stories about his time on active duty, which began just after the Vietnam War ended (say, 1975-76). I do remember that he’d served two tours active and had then recently gone to the reserves.  He was around for a couple of years but I did not keep in contact with him. I don’t think I’ve seen him since at least 1986 or so.
This was a lead at least. I immediately got onto the people who worked in the modern Armed Forces Unit to see if I could get  more information out of him about this mysterious Jeff.  I looked everywhere, even having a look on Facebook but I couldn’t turn up anyone who matched with the description of Jeffrey. I put a message on the US Armed Forces Facebook in hope of someone remembering him and suggesting where he might be. Nothing came back. However, I got another email from the guy who posted the comment about the man who saw the Troughton episode.

The sergeant wasn’t the one who didn’t know if this was from an AFN broadcast. Rather, I am. Frankly, I don’t remember if AFN was even mentioned. This report only became significant with the fact that the Taiwan DW cache evidently came from an AFN archive. Beyond that, I can’t say for certain this was from an AFN broadcast. But given the timeframe, its a good possibility.
The man was right, someone must remember. Someone must have. However, nobody seemed to want to talk about it. It was almost as if the episodes had just appeared and nobody remembered them. Nobody at all. Maybe some more leads will eventually come. Maybe. For the moment, though these episodes seem tantalizingly out of reach and have yet to give up the whole truth of how they ended up in Taiwan.
I’d like to thank the following people for their contribution to this article: Eric Loveman, Paul Vanezis, Douglas Killings, Andy Lehrer and Sergeant James Smith of the United States Armed Forces Pacific Television Network. If anyone knows Jeff then please can you get in contact with me or The Cult Den. 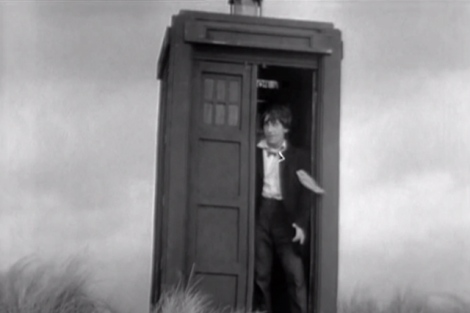 6 responses to “A Time Lord Escapes From Taiwan: The Follow Up To A Time Lord in Taiwan”