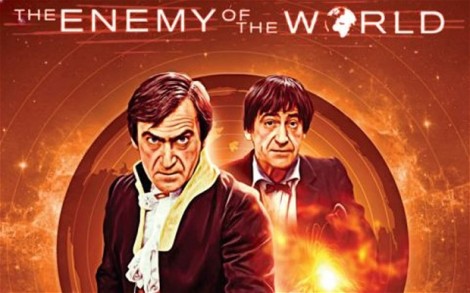 Victoria: Perhaps we’ve landed in a world of mad men!

Doctor: They’re human beings, if that’s what you mean. Indulging their favorite pastime of trying to destroy each other.

Lost for 45 years. Digitally restored and exactly as it was broadcast.

The Enemy of The World is Doctor Who’s first real take on the spy story. Combining James Bond with John Buchan’s The 39 Steps, Enemy of The World is an action adventure. Opening with our heroes being chased across the Australian beach by people who want to kill them, the story keeps your attention throughout. It forces you to cling on by the britches and not let go until the end of the 6th and final episode. The whole episode seems to almost be a child of its times. Heavily influenced by the Cold War between Russian and America, The Enemy of The World shows the rise to power of a persuasive cigar smoking South American. Sound familiar? Salamander and Castro’s likeness is, like that of the Doctor and Salamander‘s quite eerie.

The story would still work well even if you did take The Doctor and his companions out of it, which shows that it is truly a great story. The problem with modern Who is that the plot tends to be too entangled with The Doctor and his whole mythology; Moffat seems more interested in either over examining the central character or becoming over engrossed in creating a problem for the audience to solve (How can Amy be pregnant and not pregnant; Who is River Song; How can Clara keep dying, etc…) rather than simply telling a good story. Now character development is all well and good but as the recent Sherlock episode “The Sign of Three” showed, without plot character focussed drama can turn into a soap opera type storytelling; by getting so engrossed in trying to make the character unique and having problems for them to solve can lose all narrative purpose which results in a mess. The fact that The Enemy of The World could stand up as an interesting story on its own is a testament to the writing skill of David Whitaker.

The acting though not exceptional is pretty good and has a true 60s feel to it. Troughton shines through playing the double role of Salamander/ The Doctor (maybe in a future episode Salamander’s Scottish father could pop up played by Peter Capaldi?) particularly in his portrayal of Salamander does Troughton excel. He does seem very threatening and a man who not only feels in control of the situation but is in control of it. As we see Salamander’s empire crumble around him he gets more threatening and seemingly madder. By the end of the final episode he is not only mad but particularly desperate and it is this desperation that leads to his downfall which is wonderfully played by Troughton.

All in all, The Enemy of The World is a neat little six parter. It is an action packed, Bondian, Cold War era Doctor Who story with all the thrills and spills that are implied by the above remarks. If anything you should watch it for Patrick Troughton’s acting which is superb throughout. It is a highlight of Doctor Who history that I’m very thankful has been brought back to us.