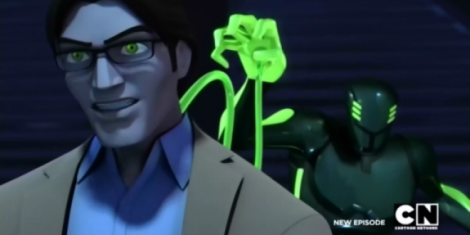 In their next attempt to gain access to the Ion Cortex, the League of Assassins sends another one of their agents to steal the information directly from Burr’s mind: a wall-crawling computer-assassin named Cypher. Batman and Katana try to stop him, but Katana inadvertently gets herself captured. Now, Batman must find a way to take down Cypher, while he is in control of both Burr and Katana.

After a “previously on Beware The Batman” segment we go straight into the episode. The architect behind Wayne Tower, where Dr Jason Burr lives, is kidnapped by a mysterious being called Cypher. After Gordon finds the architect he contacts Batman. Informing The Dark Knight of the evidence, Batman is soon off to Wayne Tower. Meanwhile, Katana’s dinner with Dr Burr is interrupted by the appearance of Cypher. Cypher kidnaps Burr and uses him as a puppet. Batman arrives and explains to situation to Katana. They go off in search of Burr and Cypher. After several chases around during which Katana becomes a puppet, Batman finally defeats Cypher with the aid of a now free Katana.  Burr is taken to hospital for his injuries but the twist in the story’s tale is that the Cypher is still in control of Burr.

Control is a cat and mouse type episode in which most of the screen time is spent following Batman and Katana trying to capture Cypher. This does not make it a dull episode, far from it. If, however, you are looking for a deep and meaningful plot then this is not the episode for you. The episode is similar to other League of Assassins related episodes in the fact that it feels too much like it is only there to advance the plot. So far the writers have not managed to pull off an episode which mixes both arc advancing with a very interesting and complex plot. However if you just want to watch a brilliantly animated chase episode, then Control is for you. The episode certainly won’t win any awards for ground breaking scripting or animation but it is certainly an entertaining enough episode.

One response to “Beware The Batman: Control Review”