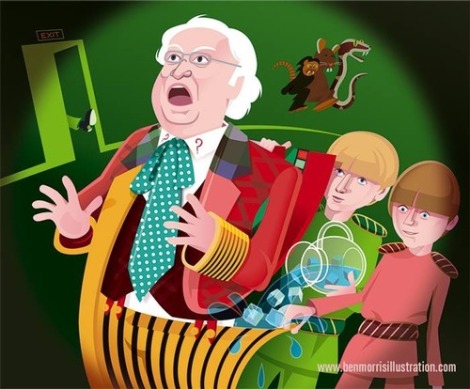 To celebrate the 50th anniversary of Doctor Who, I shall be conducting several interviews throughout the year with members of the Doctor Who team past and present. The sixth in the series is with great chap and  Doctor Who Magazine /  Doctor Who Adventures Illustrator Ben Morris. Ben recently illustrated the wonderful Who – Ology a book written by Cavan Scott and Mark Wright which you can buy in all good bookshops.  All illustrations featured are copyrighted  and belong to Ben. Check out his Tumblr blog here: http://benmorrisillustration.tumblr.com/

Hi Ben, thanks for agreeing to this interview. You have done the illustration for DWM’s production notes since 2004. How did this come about?

Yes, I did the Production Notes illustrations for nine years until DWM tweaked their layout at the beginning of 2013. Now I illustrate Jac Rayner‘s Relative Dimensions.

I originally got the job by writing to Clayton Hickman (then editor of the magazine) and asking if I could do it! I had never done any Doctor Who-related illustrations professionally before, but I’d done a few illustrations for Radio Times (along with a number of national newspapers) so I think Clay gave me the job on the strength of that.

I did the same thing four years later when I wrote to Doctor Who Adventures to see if they had any work going, and it worked again. That led to being commissioned to draw over 200 character icons for them, as well as puzzles. So the moral of the story is never be afraid to ask! 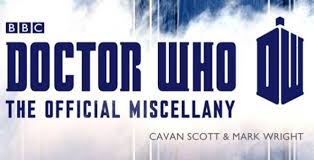 Whoology, a book about Doctor Who was recently published illustrated by yourself. How do you think the book has been received?

The reaction has been great. It made number 10 in the Sunday Times best selling books list in May. I was chatting to Justin Richards (Creative Consultant for BBC Books’ Doctor Who range) last month and he said that Who-ology had been selling in consistently high quantities since it was released (often the sale of books dips after an initial high).

I’m really pleased with the reviews. It was great fun to work on, and I had a lot of freedom. I look forward to working with Cavan Scott and Mark Wright again; they were both very enthusiastic and encouraging.

You are a big fan of Eurovision, as you can tell from the fact you made the pop icon Eurovison pictures for Eurovison 2011. What is it about Eurovison that you enjoy?

I’ve been producing the Eurovision minipop icons for the last three years. Initially I intended the project as a pitch to the official Eurovision merchandise company. They were keen and presented the idea to the EBU, but for a number of reasons they dropped it. So I kept on with the idea and it’s reached the stage where the BBC are now keen to do something with them. I hope to keep developing the idea for some years to come.

I love working on the icons and seeing the reaction to them when I go and see the contest. I’ve loved Eurovision since I was a child. It’s great fun. I enjoy hearing other languages being sung. It’s a shame there’s so much prejudice against the contest in the UK, as I think there have been some great Eurovision songs over the years and it’s a really slick show these days.

You recently worked on the Behind The Sofa Doctor Who charity book. How were you approached to do the illustrations for the book?

Steve Berry was familiar with my work through DWM. He got in touch about it more than a year before I got the green light to start on the illustrations. He was really passionate about the project as his mum had early onset Alzheimer’s and he cared for her in the last few years of her life. He worked like a dog to put it together over four years, and all the profits went to Alzheimer’s Research.  The book is being reprinted by a bigger publisher, Orion, later this year.

Which Doctor you find is the most interesting to draw? Which has the most potential for caricature in your opinion?

​I really enjoy drawing Troughton and Pertwee, but I have had very few opportunities to do so. Usually I’m required to draw the incumbent Doctor, so I’ve drawn David Tennant and Matt Smith countless times but not so many of the previous ones.

But it’s likely that I’ll get to draw more of the classic Doctors soon. Troughton has such an expressive and lived-in face. I’m looking forward to drawing more of him. 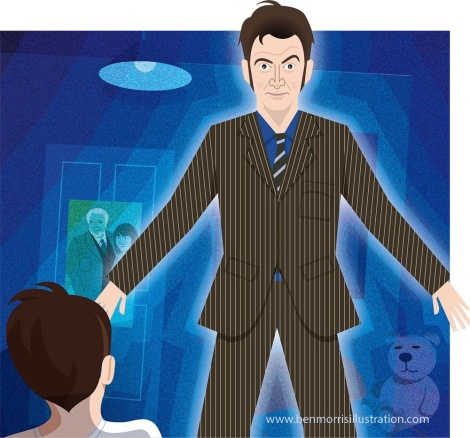 Did you always want to be an artist or did your desire to draw come later in life?

I’d always enjoyed drawing, and did well at it at school. But I’d wanted to be a journalist until I was about 15 (as English was my favourite subject), when I had work experience with the Nottingham Evening Post. That put me off! I realised I wasn’t cut out for it, and started to think of things I might be better at.

My art teacher recommended I did a foundation course in art and design, which I did at what was then Trent Polytechnic. And I stayed on there to do a graphic design degree.

After that I decided that I’d like to go and live in Edinburgh, as it was a place that I’d always loved. I was lucky to get a job straightaway in a design agency there, and then a couple of years later I set up on my own, initially as a freelance graphic designer. But, over time, I got more and more illustration work as that was more my forté. (Having said that, I’d say I am still more interested in the work of graphic designers than illustrators.)

Do you find that because of the age differences, that you tend to use different styles when doing illustrations for Doctor Who Adventures and Doctor Who Magazine?

Yes, the icons I did for DWA were a much simpler and more graphic style than the illustrations I do for DWM. I like to be a bit more experimental with my DWM illustrations and try out different styles. I haven’t always been successful in that respect. But I always remind myself that, if it’s not turned out quite as I hoped, there’s another one along next month and hopefully that one will work out better!

Which method of illustrating is your favourite? Using pen and paper or using drawing software on a computer?

Well there are advantages to both, and I like to incorporate both techniques wherever possible. I like the spontaneity of using a paintbrush and paper – I don’t feel I ever quite get the same immediacy when drawing straight on screen. But, of course, the great benefit of drawing in Illustrator is that changes can be made so simply. If a client says, ‘I like it, but can I have it in pink,’ that would probably be a nightmare if I was working on paper. But on the computer it’s easy to resolve.

Which of the previous Doctor Who artists is your favourite?

I love Frank Bellamy’s work for the Radio Times from the seventies, and Victor Reinganum’s from the previous decade.  I just love Bellamy’s use of negative space in his little black and white thumbnail drawings that accompanied the listings.

Some of his and Reinganum’s work is currently on display at London Museum’s Radio Times retrospective. I spent ages studying the illustrations from different directions, working out when they’d used a pen and when a brush, and seeing how they seamlessly blended Letraset halftones into their drawings. Victor Reinganum’s simple, graphic Dalek production line from Power of the Daleks is fabulous.

Finally, what work have you got planned for the future? More Doctor Who related stuff I expect.

Yes, quite a lot of Doctor Who work.  I have one definite big project that will start soon. That will keep me busy for a few months. And another one, which is tentative at the moment that, if I get the green light for, will be really exciting. I’m keeping my fingers crossed for that one! I can’t say anything more about either of them at the moment unfortunately.

Alongside that, and my usual DWM work, I’m teaching myself to animate. I’m at the very early stages of that at the moment. It’s a steep learning curve for me, and I’m hoping to do an Adobe After Effects training course soon to break me in properly.

Hopefully it will turn out to be another string to my bow!