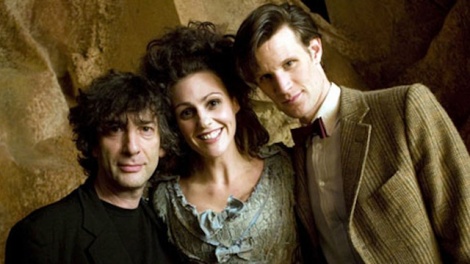 Intrigue today as Doctor Who write Neil Gaiman says an undisclosed black actor was offered the role of the 12th Doctor before Peter Capaldi and declined. Here are the quotes directly from Gaiman’s blog:

“I was rather disappointed that Paterson Joseph didn’t get [the role] last time, although I’ve loved Matt’s Eleven.) And yes, I have no doubt there will be [a black Doctor]. (I know one black actor who was already offered the part of the Doctor, and who turned it down.) Just as there will be a female Doctor.”

Who could the actor have been? Idris Elba? Patterson Joseph (again) or Chiewetel Ejifor ? Also in the same post, Gaiman says how The Doctor could get around the 13 regenerations rule:

“Well, [the regeneration limit of 13] was the rule when we had Time Lords running the show. (And they were the ones who gave the Master his extra regenerations.) There aren’t any Time Lords any more… MY OPINION (which is not Canon) is that the regeneration limit is a lot like the speed limit. You can break it, but things get a lot more dangerous if you do. The Time Lords were the traffic cops: they enforced the limit. With them gone, the Doctor can keep regenerating beyond 13, but with consequences.”

On the casting of Peter Capaldi:

“I think Peter’s a brilliant actor… I can’t wait to see what he does. I’m glad that we’re getting an older Doctor — we’ve had two puppies, it’s time to see someone older. It’ll change the nature of the relationship with Clara in interesting ways, for a start. And here, for what it’s worth, are my other thoughts: Do I think it’s time to cast a woman as the Doctor? Not yet. Not quite… [f I were show-running (I’m not) I wouldn’t cast a woman as the Doctor yet, and it would absolutely be on my list of things to do in the following regeneration. (I was the one who wrote the line about the Corsair changing gender on regeneration, in “The Doctor’s Wife” after all, and made it canon that Time Lords can absolutely change gender when they regenerate.) Some of that is stuff I’d find hard to articulate, mostly having to do with what kind of Doctor you follow Matt Smith’s Doctor with: someone harder and much older and more dangerous and, yes, male feels right to me, as a storyteller. Where you go after that, ah, that’s a whole new game…”