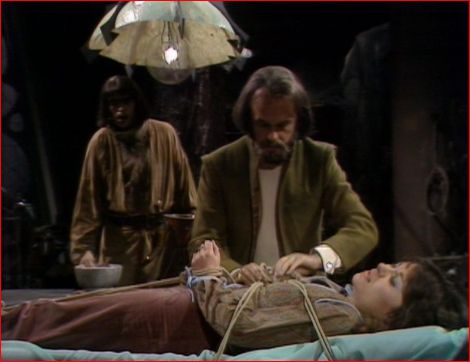 The Doctor: You can’t really go on calling yourself Morbius. There’s very little of Morbius left! Why don’t you think of another name? Potpourri would be appropriate!

Sarah: Or how about Chop Suey!

Morbius: YOU will be the first to die!

The Time lords have sent The Doctor on a mission. They have discovered that Morbius, the former Time lord president has returned from the grave. It is up to The Doctor to stop him before all the universe falls to the might of Morbius.

The Brain of Morbius, is Doctor Who at its gothic best. We have all the ingredients of a Hammer Horror: a monster, a mad scientist, his deformed assistant, an all-female cult and lots of lightening. Though Doctor Who is a science fiction programme, this serial feels more in line with the gothic horror stories of the nineteenth century than the Flash Gordon adventures of the twentieth.

Terrence Dicks, the author, felt that due to re writing the story was bland and that is should be listed under a bland pseudonym. Dicks was credited as Robin Bland in the opening sequences of the series. However, Dicks was very wrong. His story jumps to life not only in the way Morbius is resurrected but in the atmosphere the story oozes. It is either set in the dark, windswept desert of Karn or in the gothic homes of Solon and The Sisterhood. This almost constant gloom provides an excellent backdrop to the story. If it had been set on a summer’s day in Milton Keynes for example, it would not have been as effective. Solon’s laboratory is the creepiest set, which looks as though it has been heavily inspired by the Hammer Horror films. With pieces of strange technology all over the place and a twitching corpse in the corner, I would dare any viewer to watch the scenes set in the laboratory and not shiver with fear, at least once.

The plot, however, is not perfect. The story is constantly going backwards and forwards between The Sisterhood of Karn’s temple and Solon’s laboratory. It does sometimes feel forced and is too much of a distraction from the plot. The other hole is during Part Four, in which, after capturing a rabid Morbius, The Doctor tells Solon to dismantle him. However, knowing that Solon cannot be trusted, is it not odd that The Doctor then leaves? Surely he should have stayed to make sure Solon completes the destruction of Morbius instead of letting Solon repair him? Apart from these holes however, the story’s plot and characterisation is sound enough.

Phillip Madoc is wonderfully evil as the mad scientist Solon. Madoc owns the part and even manages to knock Tom Baker’s hold on the audience off. He is the perfect Who villain, charming yet deadly and obsessed with conquering the universe. Madoc is like Delgardo’s Master, instead of going for all out crazy he is subtle, showing someone who is calm and in control until things do not go his way. Madoc’s utter rage at Condor for dropping Morbius’s brain in Part Three is wonderfully unexpected and believable. The fact that he goes mad only then and is not trying to portray Solon as mad throughout shows Madoc’s acting ability. It is a shame more Who villains are not similar to Solon’s Madoc. If they were, then Doctor Who would be much more enjoyable to watch.

The Brain of Morbius is not the greatest story in Who history, it has its flaws. It is, however, one of the most atmospheric ones and keeps us glued throughout.