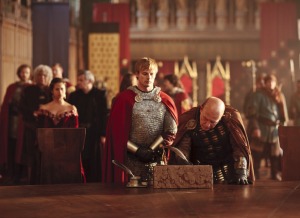 Merlin agrees to leave Camelot on a dangerous mission to help a young Druid boy. In his absence, a deadly net closes in around Arthur.

After a near successful attempt on Arthur’s life, Morgana and Gwen hatch another fiendish plot. This time they plan to kill the king by getting rid of Merlin and then convincing one of Arthur’s dangerous “allies” to kill Arthur and then take the blame.

The plot of The Hollow Queen is better than the previous episode but has far too many plot holes.  The pace is much quicker than A Lesson in Vengeance and seems to speed towards the climax sooner which is not a bad thing. However, the major plot holes seem to lie with Merlin being too trusting of the fake druid boy, Daegal. Why does Merlin not simply try and contact him using the special telepathy that Druid’s have before he sets out with someone he does not know? This seems to point out that Merlin shouldn’t really be looking after Arthur if he is that trusting. Once more Merlin uses rather bad tricks to try and create tension which better writing could have done anyway. I do fear that because this is the last series of Merlin that the show will not conclude in a way fitting its excellent beginnings.

Richard Wilson plays an incredibly baffled Guyus. Wilson has not been given much in this series until now. This episodes uses Wilson’s great comic acting and timing to bring out the potential that the character has been showing since season one. The main laughs come from the scene in which due to the fact Merlin is missing, Arthur must dress himself. However, being a King he needs help and asks Guyus to help him. The look on Wilson’s face when Arthur takes his shirt off and asks him to pass him a fresh one is priceless. Guyus’s disapproving eyebrow shoots above his head. The scene is mainly without words; tellingly, words are not really needed. The moment is finally complete when Guyus passes him Gwen’s nightdress instead of his shirt. I feel that this is the best comic moment of the series and hats off to Richard Wilson for such a funny performance.

The Hollow Queen is an improvement on last week’s story but it still could have been better. Hopefully, nearer the end of the series the writing will pick up as we go towards an exciting finale.