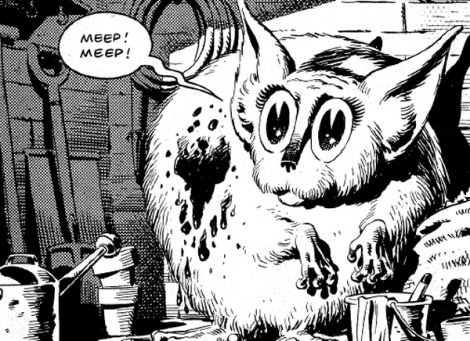 The Doctor lands in a small village. He goes to the local shop to stock up on Jelly Babies, and finds the village has been destroyed by what appears to be a legion of the Roman Army! The Doctor soon discovers that they are, in fact, robots from another universe where Rome never fell but went on to conquer the galaxy. The Doctor must stop the Iron Legion and its sinister masters before they conquer our universe!

This strip was the first to be published by DWM way back in 1979. The strip stars Tom Baker as The Fourth Doctor. The artwork is by Dave Gibbons and the script it by Mills and Wagner.  The artwork by Gibbons is beautiful, particularly when showing the Coliseum. Gibbon’s art take your breath away. Interestingly enough, The Doctor in this strip is companionless. The reason for this was mainly because later on DWM were to introduce their own companion, so they had to get rid of the present ones (with the exception of K9 who is mysteriously absent from this and the next story but suddenly appears in the strip The Star Beast. ) so that they had literally, a clean slate.

The City of the Dammed

The Doctor lands in the city Zombus on the planet   Zom.   All of the people, save a few freedom fighters, have had all of their emotions removed by the ruling council, known only as the Brain Trust. The Doctor and ZEPO (Zom Emotional People’s Organisation) must save The City of The Dammed before it is destroyed by its own lack of emotion.

This story unlike the previous one is a bit of a flop. For instance, the script (again by Mills and Wagner) is a bit of a let-down after the first introduction page.  The characters have no emotions and yet the Director General (maybe a mickey take at the head of the BBC?) pronounces  “NO ONE CAN ESCAPE THE CITY OF THE DAMMED!” If you have no emotions, how can you understand the concept of being damned? Another silly part of the strip is the fact that the Brain Trust is literally that, brains on humanoid bodies. If everyone on Zom are humans why is it that the Brain trust are Brains? No explanation is given for their appearance. Another silly part of the strip is it’s not just the fact that there are the ZEPO group trying to destroy the City, but also Big Hate and his chums. The system to brain wash everyone on Zom seems to have not gone as well as the Moderators brag about.  The art is very nice though. The story was later reused by Mills for one of his Judge Dredd stories.

The Star BeastA creature called The Beep crashes in the town of Blackcastle. It is found by Sharon and Fudge, two school pupils. The Beep seems harmless enough so they take him home. For some unknown reason, the Beep is being followed by Wrath Warriors who wish to kill him! The Doctor and K9 arrive to discover that the Beep is not all that he seems.After the rather off and off story, The City of The Dammed, things are back on course with this excellent story, again by Mills and Wagner. The moral of this story is not to judge a book by its cover. The truth about Beep the Meep (one of the best characters the strip has ever created.) is kept well under wraps until near the end of the story.Beep truly is a great villain, cunning, cruel and downright potty who in my mind should definitely come back to face the 11th Doctor. This story also introduces Sharon, The Doctor’s new companion.  She is the first none white companion to travel with The Doctor, in any medium, a whole quarter of a century before Mickey Smith and Martha Jones where even thought of. An excellent tale by the comic strip writing duo and excellent art work from Dave Gibbons, particularly his drawings of K9 and Beep are joyous to look at.10/10

The Dogs of DoomsThe New Earth galaxy is under attack from a group of creatures called Werelocks. They attack planets and are destroying the population.  The Doctor, Sharon and K9 must stop the Werelocks and their masters, The Daleks, before the whole galaxy is destroyed.The Dogs of Dooms is another fantastic strip from Mills and Wagner. The main story focusses on the New Earth system being attacked by creatures called Werelocks. They are being controlled by the villainous Daleks! For once the Daleks seems to have a good plan. They plan to turn the New Earth galaxy into their breeding ground, so they can make even more deadly Daleks. The artwork, particularly the Daleks by Gibbons, is fantastic. All round a great story with some amazing artwork. I do have one nit-pick though; K9 destroying Daleks with his blaster gun seems too far-fetched. The Daleks are the most feared race in the cosmos and yet they can get killed by a (No offence K9.) tin dog? Maybe not the best idea Mills and Wagner had.9/10

The Doctor is still trying to take Sharon back to Blackcastle, when they suddenly encounter a space time rift. The TARDIS is split apart and they encounter the evil Brimo The Time Witch!

Well what can you say about this story? This is the only one in the collection to be written by the great Steve Moore. It is pretty bad in all honesty. First of all, Brimo is condemned to her fate… Yet we don’t even know what it is that she has meant to have done! For all we know the poor women could be innocent. Next, the whole battle of the minds things is a bit silly. Doctor Who is science fiction, not science fantasy! Admittedly, The Three Doctors, which is an excellent story, uses a similar plot device but The Three Doctors is a much better story than this strip. Another thing, the whole “It will take four years to reach the other side of the TARDIS” business is rather rubbishy. Still, as with COTD, the art is pretty good.

Overall rating of this book: