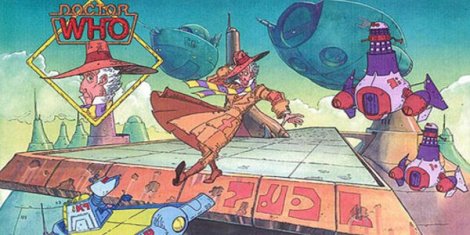 Hi Antoni. You are currently making a Doctor Who series but unlike a lot of fan film series its animated. Is doing the animation
challenging?

I’m not animating, it’s all done using a computer game called The Movies, which is fairly simple to use.

The series focuses on the 12th Doctor. How did you go about creating a new Doctor from scratch?

I wanted to do something different, I brainstormed a load of things and possible arcs and came up with this whole amnesia thing

Where can we find the episodes for the series?

In the series you have several new creatures. Was it difficult to go down the new creatures route and not just plump for
Daleks or Cybermen?

Who says I’m not using Daleks or Cybermen? The thing with the movies, as it’s a pc game you can be limited by things, people have modified things and I’ve been able to have a TARDIS imported into the game. As for new creatures, the game has a load of monster/ alien costumes I just have to come up with names and possible back stories

What was the audition experience like? Did many people go for The Doctor?

I only had one try out for the Doctor and that was Elliott Granger, he sent me a clip and I loved the audition I snapped him up straight away, I’m getting clips sent to me quite a lot for people wanting to appear, its great that so many people want to be involved

Do you feel so far the series has gone down well with fans?

Yeah, I like to think so, I haven’t had a bad comment yet, just constructive criticism, which is fine as I knew there’d be room for improvement.

Is there a website for the series and if so what is it called?

Do you write all the stories or are there other writers who contribute to the series?

Oh I have other writers working on a few episodes, well they’ve all been written for series 1 and series 2 is booked up. So I’ll be looking for series 3 writers soon!

Was is harder to animate the series than the write it?

Well the animation is easy, as I explained earlier its just a pc game. As for writing, a story idea is easy, its figuring out what the characters are going to say, what decisions can they make, and weaving other things in for example, episode 1 we see the 11th Doctor being taken to his death, I’ll tell you now. Exclusive spoiler, we’ll be seeing the 11th again

What inspired you to make the series?

I started writing short stories, I was rejected by a few blogs to post my stuff. So I started my own and then I stumbled on a few blogs doing their own series and decided to do my own

What is the future, as you see it for the series?

I’ve decided to do 3 series and that’s it! I’m planning a torchwood series, a James Bond series and maybe one-off videos for other things. I promise these will be fantastic productions and you will enjoy them all!

Thanks for talking to us Antoni. It’s been great.