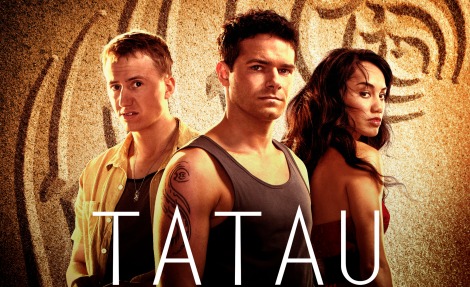 The BBC have today released promotional pictures for the forthcoming BBC 3/BBC America drama, Tatau. The drama stars Joe Layton (New Worlds, Father Brown) and Theo Barklem-Biggs (Silk,The Inbetweeners Movie) as Kyle Connor and Paul ‘Budgie’ Griffiths. The drama follows the two boys as they go on an adventure in the Cook Islands, in the South Pacific. The drama, which runs for six episodes will premier on BBC 3 soon. Below you can find the synopsis for the programme and some more promotional pictures.

Tatau follows Kyle (Layton) and Budgie (Barklem-Biggs), two twenty-something friends from London that set off to travel the world. Ahead of the journey, Kyle gets a Maori-style tattoo to celebrate their eventual destination: the Cook Islands.

When snorkeling in a lagoon, Kyle finds the dead body of a local girl, Aumea, tied up underwater. Returning to the lagoon with the police, Kyle finds her corpse has disappeared. But Kyle knows what he saw. Desperate to uncover what happened, Kyle and Budgie find themselves sucked deeper and deeper into a world of Maori myths, symbols, and hallucinatory visions… until finally the full meaning of Kyle’s tattoo is revealed.