Evolution of The Daleks

The Daleks have been around for a long time, in fact since the second episode of Doctor Who. However they have possibly the most confusing continuity of all Doctor Who villains. So today I am going to give you my idea of how Dalek stories fit into one single continuity. So, lets begin.

The Daleks began in Genesis of The Daleks (1975) in which The Fourth Doctor traveled back in time to prevent the Daleks from being created. He managed to stall the Daleks but did not stop them from escaping. For over a thousand years the Daleks were trapped. They forget everything about The Doctor. The Daleks next encountered The Doctor in The Daleks (1963/1964) in which they were almost wiped out by their neighbours, The Thals. When the Daleks finally got their act together, they sent an attack force to Earth. These events were shown in The Dalek Invasion of Earth (1964). 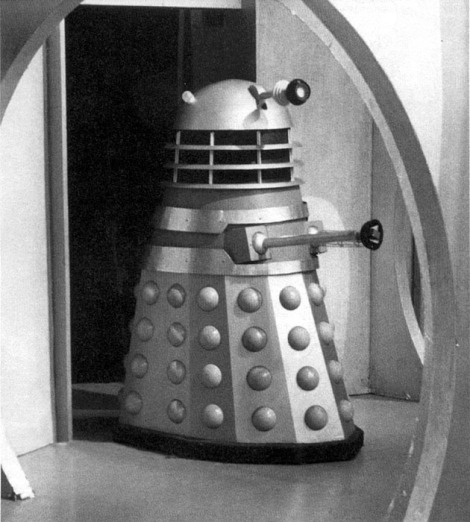 Meanwhile  the Daleks left on Skaro escaped immediately  started a punch up with the Movellans. After years of not losing or winning the war, The Daleks returned to their home planet of Skaro to dig their creator Davros out to help them stop the Movellans. These events were shown in Destiny of The Daleks (1979). Davros was captured by Earth’s forces and imprisoned for 90 years. During the 90s years the Daleks lost the war with the Movellans and escaped to different sections of the galaxy. When Davros was finally woken up in Resurrection of the Daleks (1984) Davros created a cure but also caused a minor civil war between two Dalek fractions. Davros escaped and went off to create a new batch of Daleks. The Daleks sent one attack force after Davros while they sent another attack force against their new enemy: The Doctor. Using a new form of time travel that they had learned from examining The TARDIS The Daleks, sent a time machine assassination squad to find and kill The Doctor. These events were depicted in The First Doctor story The Chase (1965). About the same time as this or shortly after, The Daleks caught up with Davros. However, when they saw The Sixth Doctor they did not recognise him due to his face not being included in the memory scene in Resurrection of The Dalek.

However if this is true then how was it that The Daleks of The Chase could not create an up to date First Doctor with all the information programed into him? Sadly this is one of the small holes in my theory of Dalek continuity. Next, The Daleks put Davros on trial for his crimes against the Daleks. I suspect that Davros is sentenced to life or something of that kind and the Daleks continue on their path to the destruction of all worlds. The Daleks decide to launch a master plan. Quite literately in the story The Dalek Masterplan

The Dalek Masterplan was broadcast from the end of 1965 to the beginning of 1966. After the Dalek’s Masterplan went pear shaped. The Daleks next decide to attack Earth (again!) this time however they actually win (for a bit). The Third Doctor travels back and forwards in time and finally beats the Daleks. The story was called Day of The Daleks (1972). Next the Daleks decides to have another stab at ruling the universe but since their rather embarrassing defeat in Masterplan they decide to join forces with The Master and use him as an agent to stir up rivalries between the Earth and Draconian Empires. After The Master makes a mess of things, the Daleks decide to put their main plan into action; launching a group of ten thousand Daleks at the Earth. However, The Third Doctor and his companion Jo Grant follow them and stop the attack. Both events are shown in the intertwined Dalek stories Frontier in Space and Planet of The Daleks both shown in 1973. 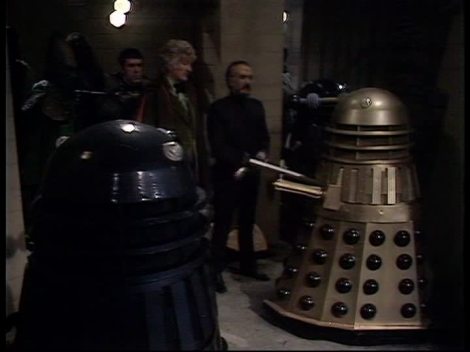 Next the Daleks decide to hold the universe to ransom by finding the only cure to a disease that is spread throughout the galaxy, in the story Death To The Daleks (1973). Once again they are foiled by the Third Doctor this time in the company of Sarah Jane Smith. It is most likely that at this point The Timelords (The Doctor’s people and creators of Time Travel) become concerned with Dalek activities and send The Fourth Doctor back to the beginnings of the Daleks. The Daleks try one last ditch attempt at mastering time travel by stealing the TARDIS and then forcing The Second Doctor to spread The Dalek factor throughout the universe causing ever living thing to become a Dalek. Instead, The Doctor gives the Daleks the human factor and causes a civil war on Skaro. The events of this story were shown in Evil of The Daleks (1967). It as at this point that Davros is finally broken free and takes over Skaro. He then decides to steal The Hand of Omega. Going to 1963 Davros and his Daleks attempt to steal the Hand. However, other Daleks appear and steal the hand back. Eventually The Seventh Doctor defeats both of the by blowing up Skaros and starting off The Time War. Not your best move their, Doc. A few Dalek survives from the Civil War end up on Vulcan and are buried for centuries. They are rediscovered by human colonists to the planet. The Daleks trick them into giving them power but the recently regenerated Second Doctor stops them and saves the day. These events were shown in the story Power of The Daleks (1966.) Meanwhile a Time War is about to beginning.

We don’t see the main events of the Time War because Doctor Who was not on our screens but we see the aftermath. The Daleks (or rather “Dalek”) next appear in the 2005 episode Dalek featuring The Ninth Doctor and Rose Tyler. The Dalek downloads the entire internet and goes on a rampage doing what Daleks do best. However, when  touching the Dalek because she pity’s it, Rose Tyler gives it some of her DNA and the Dalek becomes more human and eventually self destructs. The next time we see the Daleks is in the two part series finale story Bad Wolf/Parting of The Ways (2005) in which the Ninth Doctor comes up against the Dalek Emperor and all his minions. Eventually The Doctor and his companions defeat the Daleks and they are once again blown up. However the events of the story leave The Doctor injured and he regenerates into his Tenth Incarnation. 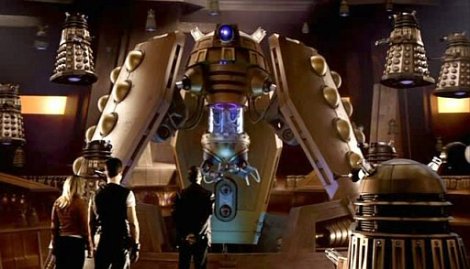 The next time The Doctor meets the Daleks is in the 2006 series finale Army of Ghosts/Doomsday. The Cult of Skaro apparently escaped the Time War and have now returned to this universe to destroy everybody by opening the Genesis Ark an letting millions of Daleks out.  They are foiled by The Tenth Doctor. However The Cult of Skaro escaped and to  1930s America where the Cult are building the top of the Empire State Building in a vain attempt to create a new race of Human Daleks. They are again are defeated by The Tenth Doctor in the 2007 story Daleks in Manhattan/ Evolution of The Daleks. Again one Dalek escapes, the Dalek known as Dalek Caan. This Dalek goes back into the Time War and rescues Davros and the Supreme Dalek (presumably the Emperor from 2005’s second in command.) and brings them to the presents. This show down between The Tenth Doctor and the Daleks is shown in 2008’s series finale Stolen Earth/Journey’s End. Somehow, a few of these Daleks escaped to 1940’s England. Claiming to be invented by their android Professor Bracewell , the Dalek wait for The Doctor to arrive. He does now in his Eleventh body accompanied by Amy Pond. The Doctor accidentely confirms who these Daleks are meaning that the Dalek Progenitor is activated. The Progenitor creates a brand new batch of Daleks who sail off to conquer the Universe again.

That is a potted history of The Daleks from my point of view. If you think I’m wrong or liked the post then please do comment below.